Scott Blair is a freelance illustrator currently located in Tampa, Florida. He graduated in 2000 from Middle Tennessee State University with a Bachelor’s Degree in Graphic Design – focusing on illustration. Originally working traditionally in acrylic paints, Scott made the switch to digital painting in 2005. He takes his original drawings, scans them into Photoshop and paints them digitally using a Wacom pad.

His early professional work includes cover artwork for various wrestling dvds, including the 2005 Hardcore Homecoming event, for sale in Best Buy, FYE , and Walmart. He also created promotional artwork for various MMA and UFC fighters including Chuck “The Iceman” Liddell and Randy “The Natural” Couture.

In 2007, Scott shot a Bettie Page inspired photo shoot, after which he realized that creating modern pin-up art was his new passion. Since then, he has been creating custom pin-up artworks for commercial and private clients, ranging from t-shirt designs to airplane nose art. Scott’s digital pin-ups have been licensed for stickers, psp tubes, t-shirts, metal tin signs, trading cards, fantasy books and calendars. Scott, along with his gorgeous pin-up models, started the convention circuit in 2009 – promoting his pin-ups at various Comic, Tattoo and Horror shows around the states.

In 2010, HARD CANDY was released, a collections of Scott’s modern pinup art, and has since sold out. 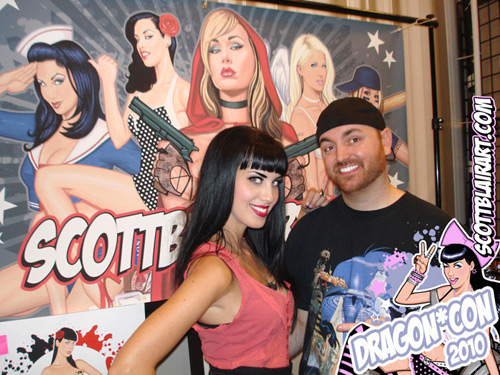